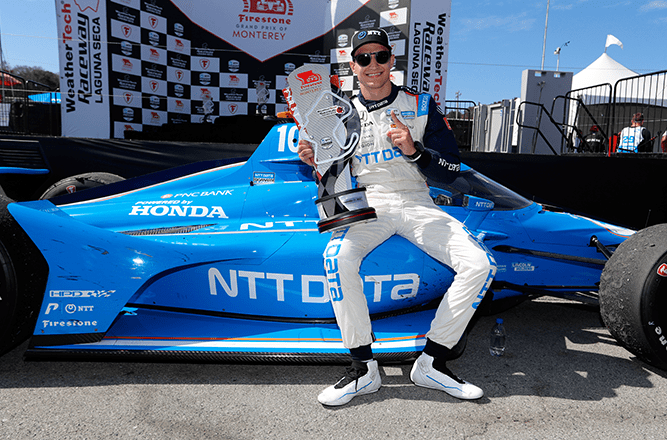 Alex Palou closed off the 2022 NTT INDYCAR SERIES in dominating style Sunday at WeatherTech Raceway Laguna Seca, with the Honda driver leading 67 laps to win the Firestone Grand Prix of Monterey. The outgoing series champion started 11th, but used a strong second stint work his way into the lead, then built that advantage throughout the second half of 95-lap contest, holding an impressive 30-second margin of victory at the finish.

Seeking his seventh INDYCAR drivers’ title, Scott Dixon was unable to make the progress he needed in heavy traffic to finish 12th in today’s race, and third in the championship points standings.

Alex Palou (#10 Chip Ganassi Racing Honda) race winner, outgoing series champion finished fifth in the final points standings: “It was an amazing day! Conditions were extremely tough, we knew they would be going into it, but we felt really good in warm up and were looking forward to the race. Everything went super smooth during the race, pit stops, strategy, tire, engine. We got some really good fuel milage out of our Honda engine that allowed us to do the race in three stops. That made our day a bit easier! I can’t wait to get the off-season ended and start again and hopefully start it like we finished this year.”

Christian Lundgaard (#30 Rahal Letterman Lanigan Honda) finished fifth, won series Rookie of the Year honors: “The Rookie of the Year title is just a big reward for all the hard work we’ve done this year as a team. At this point, I’m just so happy we’ve managed to move up through the field. For much of this season, we’ve executed in qualifying, but then either stayed there or gone backwards during the race. This weekend, we really didn’t have a decent car, and qualified near the back. But this time we were able to gain positions in the race. It’s just rewarding to move forward – and to get the rookie championship done. And now there’s another championship to go win next year!”

Scott Dixon (#9 Chip Ganassi Racing Honda) finished 12th, six-time series champion finished the season third in the points standings: "We tried a bit of everything today. We ultimately just didn’t have the pace, to be honest. The tire deg [falloff in grip] was really high, especially in traffic. And we just kept coming out of the pits in a train of cars, and used the tires too much trying to move forward. After the last stop, we finally had a clear track and then our pace was good. Like a lot of us here, I’m looking forward to the track being repaved this winter. Currently, it doesn’t really suit my style very well. Everyone on the team did a hell of a job all season long. We made the most of what we had at every race, and finished every race lap this year, which is definitely a huge milestone in itself. With our partners Honda and HPD, the effort they make every race weekend is a feat in itself. We’ll keep after it, we know exactly what we need to do in the off-season, so hopefully we can make some gains in those areas. We’ll be fighting for [championship] number seven next year.”

David Salters (President and Technical Director, Honda Performance Development) on today’s race and the 2022 NTT INDYCAR SERIES season: “I’d just like to thank and congratulate all the hard working, smart men and women of Honda Performance Development. It was nice to finish off the season with a victory today, especially such a dominant one from Alex Palou. That was a champion’s drive. I also would like to thank our great teams, but particularly Chip Ganassi Racing, who just consistently deliver race-in and race-out. So well done Alex, well done Chip Ganassi Racing, well done HPD. In some ways, this was another good year for us. We won the Indianapolis 500 for the third consecutive year, and set a new pole qualifying record. That does not suck. However, compared to the last couple of years, this season wasn’t quite up to our usual standards. We’ve got work to do during the off-season, so we’ll go away and do some work. That’s how racing operates. Racing also helps us develop our people and entertain our fans. Honda enables us to do this. So, finally, thank you to Honda for allowing us to participate in this great sport.”

Today’s dominant win by Alex Palou is the third consecutive INDYCAR SERIES victory for a Honda driver at WeatherTech Raceway Laguna Seca. Andrettti Autosport’s Colton Herta won in both 2019 and 2021. No race was held here in 2020 due to the COVID-19 pandemic.