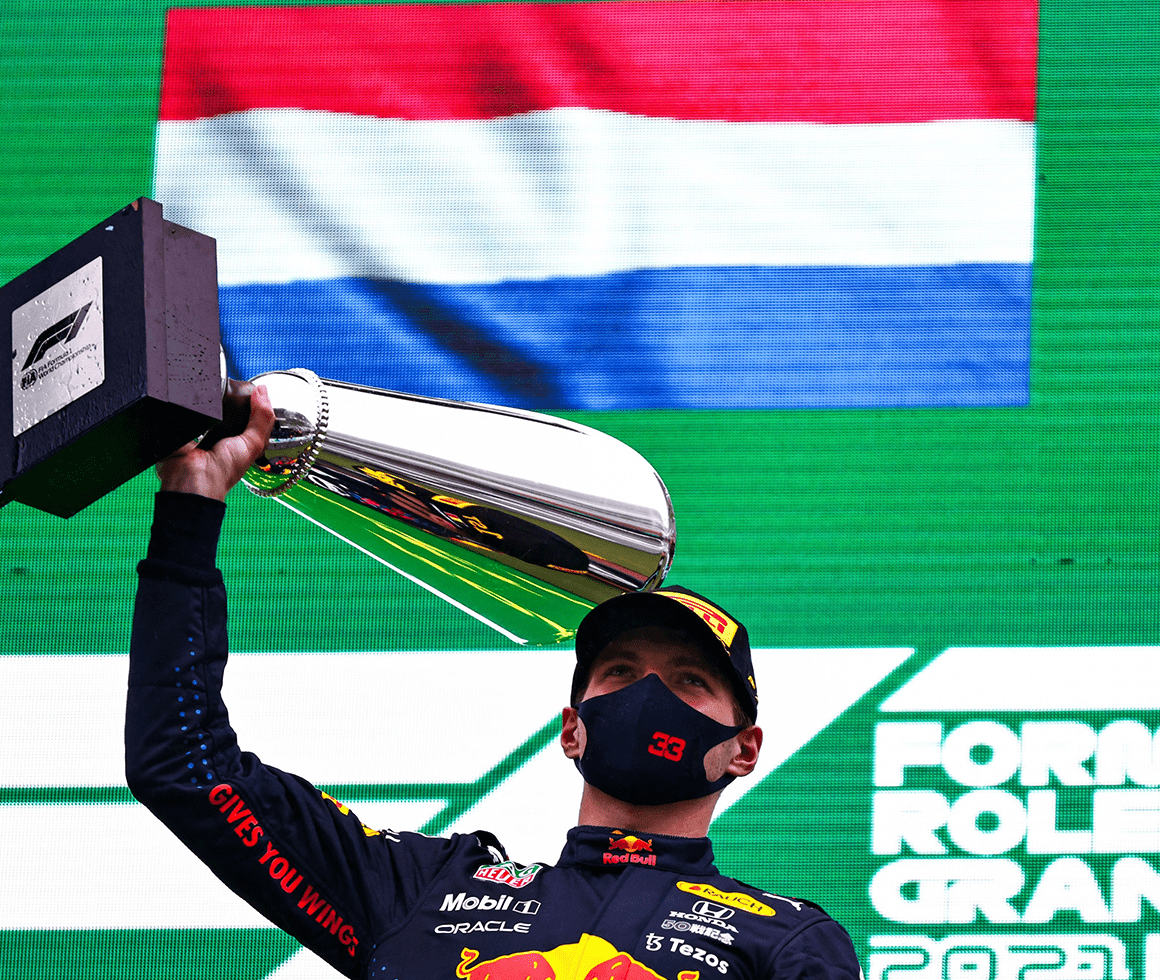 Honda and Red Bull Racing celebrated their 50th race of partnership with a win at the Belgian Grand Prix, however, it was a victory earned more through Max Verstappen’s efforts on Saturday than anything that was accomplished on race day.

A rain-marred weekend at Spa-Francorchamps was punctuated by heavy rain on Sunday that limited action to just two parade-style laps behind the Safety Car, leaving the majority of the results to be determined on the basis of Saturday’s qualifying results.

Those results rewarded Red Bull’s Max Verstappen pole-winning run from Saturday, turning that effort into his sixth victory of the season after the race was stopped due to the heavy rain.

The two pedestrian laps allowed the race to be classified as official, although the reduced distance meant that only 50 percent of the championship points were awarded for the effort.

Pierre Gasly tallied his ninth top-10 result of the season in the Scuderia AlphaTauri Honda with a sixth-place finish, made possible by a Saturday effort that saw the Frenchman qualify in the first three rows for the ninth time in 2021.

Unfortunately, the rain claimed one victim as the cars made their way around the 4.34-mile circuit to line up on the starting grid. Red Bull’s Sergio Perez aquaplaned off the track and had contact that caused suspension damage prior to the start of the event. Had the race begun at its scheduled time, he would not have been able to compete, but the long rain delay allowed the Red Bull squad to prepare the car and have it ready for the race start.

The contact allowed AlphaTauri’s Yuki Tsunoda to gain a spot and finish 15th after qualifying 16th, while Perez was officially classified as placing 20th in what was the shortest race in Formula 1 history.

The win enabled Verstappen to close on championship leader Lewis Hamilton, narrowing the gap to just three points after 12 of the year’s planned 22 races. The victory is the Honda’s 12th in its 50 races with Red Bull Racing and its 13th since returning to F1 racing in 2015. The victory is also the 85th in Honda’s storied Formula 1 history. The series will get just one week to dry out as it journeys to Zandvoort for next weekend’s Dutch Grand Prix.

"Because of the very bad conditions with rain falling all day, we only managed a few laps behind the Safety Car. This was a great shame for all the spectators who stayed right to the end in the hope of seeing a race. We really wanted to be able to put on a good show for them. Thanks to his pole position yesterday, Max was declared the winner in what was our 50th race with Red Bull Racing. Pierre also picked up points for sixth place, so both our teams scored points, which is always satisfying. Unfortunately, although the mechanics did a great job to repair Checo’s car after he went off on the formation lap, he had to start from pit lane with no chance of points. Now we head to Zandvoort for next weekend’s race, the second consecutive home Grand Prix for Max and we are already focussing on getting the best possible result with both our teams."

"It is always good to win and the points are important but today is not how anyone wants to do it, especially on our 50th start with Honda. In hindsight it was very important to get pole yesterday and although it’s a big shame not to do some proper racing laps, as I really love coming to this track, it was just impossible in these conditions. I thought maybe at 15:30 the conditions were a bit better than just now when we tried to re-start but the visibility was still very low and I understand why we couldn’t race today. For me in the lead the visibility was a lot better, even with the Safety Car ahead, but the guys behind me couldn’t see a single thing and if someone went off at Eau Rouge and bounced back onto the track they could have been T-boned at high speed which we do not want. It was also extremely low grip and because it kept raining all afternoon it just didn’t improve. I think today the big credit goes to the fans around the track who stayed here the whole day in the rain, wind and cold. It must have been horrible to sit in those conditions so a big thanks goes to them and they should be the real winners from today. Now we have to keep on pushing and trying to re-gain the championship lead. I’m confident we have a good car and there is a long way to go so we just need to make sure we get the best performance out of it for the rest of the season."

"It was a strange afternoon and I have to say thank you to the fans, they were incredible for staying with us in the rain and cold. It’s a shame we couldn’t put on a good race for them today but we as a sport tried our best to race but it just wasn’t possible. The lap to grid was my mistake, the conditions and visibility were extremely poor and I just went on the kerb and lost it. I always knew there was a small chance we could get the car back out and the Team was pushing hard, really showing the spirit of Red Bull Racing which was nice to see. My Team did what they do best and they repaired the car so quickly it was incredible. I really wanted to repay them for their hard work during the race but that didn’t happen, luckily we are racing again in a few days and we all look forward to Zandvoort now!"

"It’s been a long day and I’m very disappointed that we didn’t get to race. I think we all feel very sorry for the fans that have stayed with us in the rain all day, without any racing and I would like to thank them all for staying until the end. However, the conditions were very extreme, I don’t think I’ve driven in conditions worse than this before. I think that the problem was that if anyone spun in the first lap, there was absolutely no visibility and there would’ve been a big accident. We know how dangerous it can be to race here, so this was absolutely the correct decision."

"It was clearly not possible to race today, especially for any drivers from P7 onwards, I think the visibility was just too poor. It would’ve been far too dangerous to race in these conditions here today, particularly on such a high-speed track like Spa, so for safety I think the FIA made the right decision today. Obviously, it’s disappointing on a personal note to not have had the opportunity to race for points today, but safety is far more important."