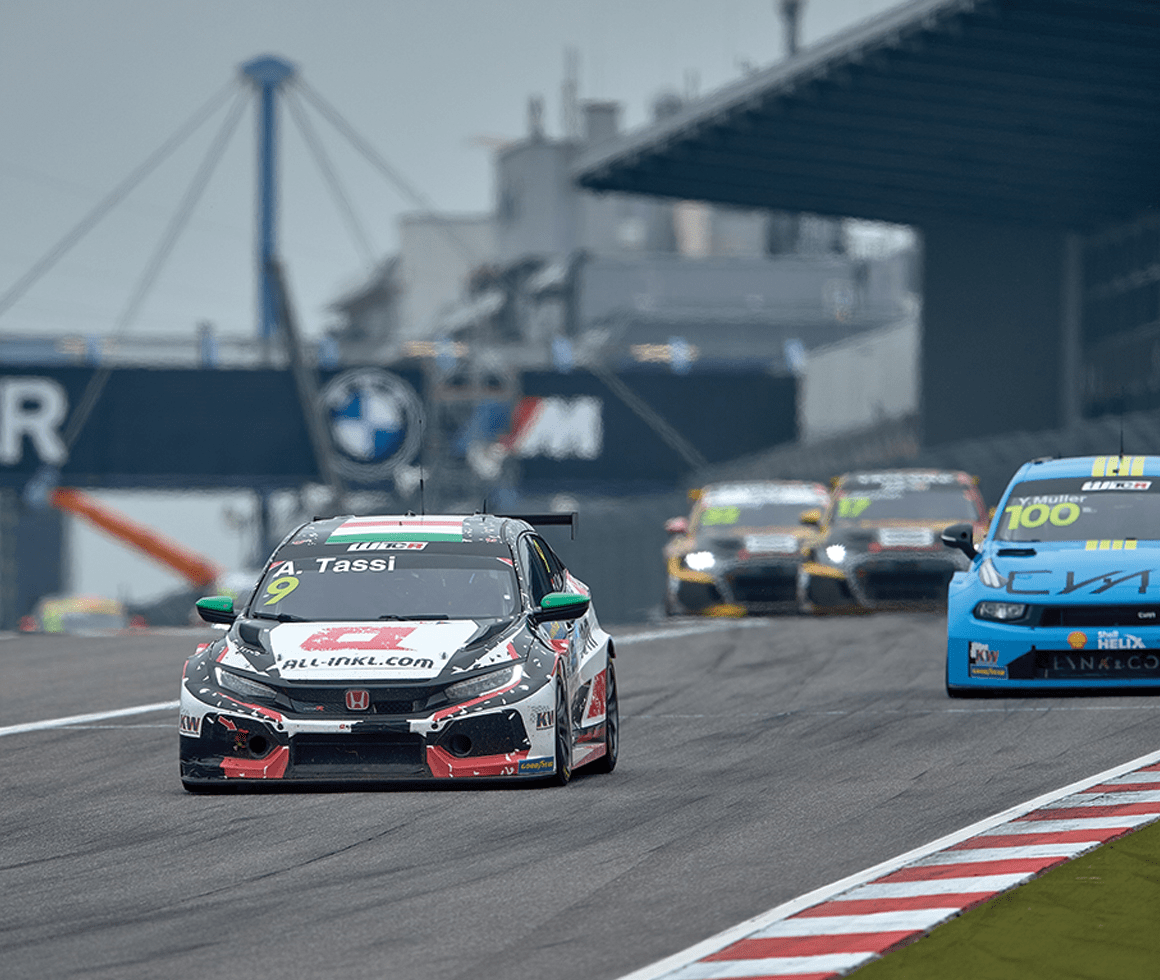 5th June, Nürburgring, Germany:  Tiago Monteiro gave the Honda Civic Type R TCR victory in the opening race of the 2021 WTCR - FIA World Touring Car Cup season at the Nürburgring Nordschleife as both Münnich Motorsport teams got their campaigns off to a flying start.

The Portuguese ace completed a perfect drive, pouncing near the end of the final lap of the 25.378-kilometre circuit to snatch the victory.

Having run fifth on the first two laps, Tiago took advantage of other cars tripping over one another at the first corner at the start of lap three to slip into second place. After then catching up to the race leader on the Nordschleife, he made his move for the position on the long Döttinger Hohe straight, heading the chasing pack from there over the line.

As well as being Tiago's first victory since an emotional win in front of his home fans in Vila Real in July 2019, it was also the first success for the ALL-INKL.DE Münnich Motorsport squad in the WTCR.

That result, coupled with an eighth-place finish in Race Two, meant Tiago ended the weekend as one of two Honda Racing drivers in a share of second place in the Drivers' standings.

His team-mate Attila Tassi also kept his Civic Type R TCR out of trouble, netting 12th place in Race One before charging through the pack in the second race to finish fourth.

The 21-year-old started that race 13th but avoided a melee at the first corner - where Tiago was squeezed out wide - to run in an early sixth place, and then made two overtakes in as many laps on the Döttinger Hohe to complete his recovery from a lower than hoped for grid slot.

There was also a podium for the ALL-INKL.COM Münnich Motorsport outfit to celebrate, as Nestor Girolami claimed third in Race Two.

Argentinian Nestor started from pole position, but a slow launch meant he had to slot into third at the first corner. He stayed with the two leaders on the opening lap before deciding to preserve his tyres for the remainder of the three-lap race and ultimately settled for third.

It nevertheless capped a fine round for 'Bebu', whose ninth-place finish in Race One meant he and Tiago - who will also both contest the Nürburgring 24 Hours in a Civic Type R TCR - ended the weekend tied on 33 points, just six shy of the WTCR series leader.

Nestor's team-mate Esteban Guerrieri felt he might have had the pace to challenge for victory in Race Two, but his hopes were dashed when he was unable to get away from the grid on the formation lap.

The double Nürburgring WTCR race winner did however take the start from the pitlane and charged through the pack not once but twice - having also been forced to serve a drivethrough penalty - to finish 12th.

Esteban did at least experience better fortune in Race One as he claimed fourth, finishing less than a second behind race winner Tiago.

Tiago Monteiro said: "It's fantastic to start the season with a win, I felt a lot of adrenaline today. It was one of those great races where you try to plan everything in your head and it all works out - it doesn't happen often, especially not here. I lost a place at the start but the pace was good and I had the same rhythm as the top four so just stuck with them, then after the contact in front of me I took the chance to get second. Then it was a matter of following Yvan Muller and trying something at the end. It was a good and respectful fight with him, I knew we could race each other fairly. The car was very good, so thank you to ALL-INKL.DE Münnich Motorsport, Honda, and to JAS Motorsport as well for the updates over the winter."

Attila Tassi said: "I took it cautiously in Race One because I wanted to preserve the car, so I really didn't risk a lot at the start. On the Nordschleife the balance wasn't perfect but my pace was good, and I managed to overtake one car lap-by-lap to come home in 12th. I had a great start in race two - again I tried not to take any risks but I positioned myself very nicely to get up to sixth and made up two more places before the final lap. After that I had a vibration so I took it carefully and managed to hold onto fourth. I'm glad we managed that issue and ended the weekend on a positive note after a disappointing qualifying."

Nestor Girolami said: "Overall it was a very good weekend. Of course you want to defend pole position, but unfortunately I didn't get a good start - I did the same procedure as always but we had a small stall. After that I was aggressive in trying to defend my position on the run to Turn 1 but I left room to make sure I was fair. I tried to follow the two leaders but felt like I was forcing my front tyres a bit on lap one, so after that I just tried to keep position. I'm happy for Tiago for his victory, congratulations to him and the team. It was still a good weekend for me because we scored a lot of points, including qualifying, which is important for the championship."

Esteban Guerrieri said: "A bittersweet Saturday. I really enjoyed race one; I profited from a scramble at Turn 1 on the final lap when a couple of cars went wide to get into fourth. I couldn't quite make the podium, but of course I was very happy to see Tiago win. Unfortunately before race two we had an issue. It was a real shame because when I was pushed into the pitlane all of a sudden the car started. We had a really good car and did a good improvement between races, I really feel like it was a winning car. But that's life, and we can still be really happy with the team's effort and our processes this weekend. Now I have one of the best prizes of my life to look forward to in the coming weeks with the birth of my son; I'm so excited for that, and to be focused there for some time before coming back recharged for round two."

Dominik Greiner said: "We can be very happy with the performances we have seen today. Congratulations especially go to Tiago for his first win for ALL-INKL.DE Münnich Motorsport, it is what he and the team deserve after a lot of hard work over the winter. It was not the perfect raceday, but Nestor's podium is another good reward and validates the work the guys have put into improving the cars for this season. It was a shame for Esteban that he couldn't show his potential in Race Two, but he still managed a good recovery to add to the points totals. Overall we can leave very satisfied with our positions in the Teams' and Drivers' championships."

Mads Fischer said: "It's been really encouraging to see such a good start to the season for all four drivers. Tiago drove such a smart race so I'm delighted that he achieved this victory, and to have the pace he showed backed up not only by Nestor's podium but also Attila's charge in Race Two - particularly given the difference in conditions from qualifying yesterday - confirms that the Civic Type R TCR was a very competitive package in all circumstances. Sorry for Esteban after his trouble before the start of Race Two, but as ever he showed real fighting spirit to claw his way back through and you never know how important those extra points he scored could be."