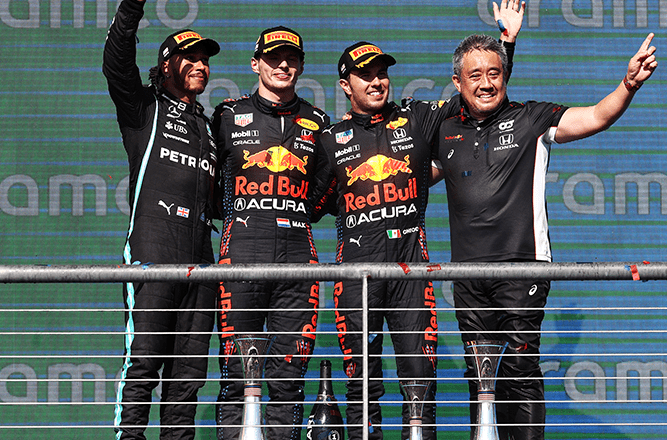 While it was legendary pitcher Satchel Paige that said, “Don't look back, something might be gaining on you,” Max Verstappen lived that credo on a warm Sunday afternoon in Austin, Texas, focusing forward to outrace Lewis Hamilton to a victory in the United States Grand Prix.

Verstappen led 35 of 56 laps in claiming his eighth win of the season, but the last handful were harrowing as Hamilton used newer tires to cut the Red Bull Racing Honda driver's lead to less than a second. Despite the pressure Verstappen never blinked and held off the Briton, taking the win and doubling his lead in the Formula 1 World Championship.

Verstappen started on pole for the ninth time this year, but Hamilton outraced him to the first turn and took the early lead. The Dutchman ran a steady second until the Red Bull team called him in for an early first stop, with Verstappen using the fresh Pirelli rubber to take a five-second lead over Hamilton. The Mercedes driver made his final pit stop eight laps after Verstappen, and whittled an eight-second lead to just one, but could never overtake the Honda-powered Verstappen over the final trips around the Circuit of the Americas.

Sergio Perez had another strong weekend, starting and finishing third, putting both Red Bull Racing Hondas on the podium for the second consecutive race. The back-to-back podiums vaulted the Mexican ahead of Lando Norris and into fourth in the championship standings.

Scuderia AlphaTauri's Yuki Tsunoda started 10th and finished ninth, breaking a five-race scoring drought for the rookie Honda driver. Pierre Gasly started eighth after his team fixed a sensor problem on the grid, but a suspension problem ended his day after 15 laps.

Verstappen expanded his points lead to 12 over Hamilton and the double podium finish allowed Red Bull Racing to close within 23 of Mercedes in the Constructor's Championship, with five races to run. The series will have a week off before heading to Mexico City for the November 7 event at the famed Autodromo Hermanos Rodriguez

“Max winning from pole and Checo joining him on the podium in third place is a great result for Honda and for Red Bull Racing. It is our second consecutive double podium and both were achieved with special liveries, the “Honda fans” white cars in Turkey and here with the Acura brand replacing Honda on all four cars. Max's strategy called for an early stop and Hamilton was really catching him in what was a thrilling finale. Max did a brilliant job of managing his race pace and the tires. Checo was quick all weekend and his second third place in a row is very important for us in the Constructors' championship. It was great to see Yamamoto-san collecting the trophy on the podium and we really appreciate this gesture from Red Bull. For Scuderia AlphaTauri, Yuki had a great start, passing two cars and after that he drove very well to bring home the points for ninth place. It was his second consecutive Q3 appearance and his first points since Hungary, so we hope he maintains this momentum to the end of the season. It was a shame that Pierre, also quick this weekend, had to retire with a suspension problem. Next comes another special Grand Prix as it is Checo's home race in Mexico. There are only five more races to go, but this is still going to be a long and tough run to the end of the season, in which each race matters very much and we plan to do our best in all of them.”

“It was an exciting race and it feels incredible to win here in front of all the fans. The pressure was on for the whole race and not knowing how quickly Lewis would catch up. I actually thought I had a decent start, but Lewis had an even better one. So we went for an aggressive strategy after losing the lead into turn one and we pitted early in the first stint. Then for the middle stint we were in that undercut range, so we had to respond and we went for track position which made the last stint very long, especially in this heat. The last two laps were definitely difficult on the tires, there wasn't much grip left.  But, then with two laps to go, I had the Haas in front of me and I was able to benefit from the DRS, so we managed to hang on in the end. We definitely gave it our all today as a Team and it was great to have Checo up there with me on the podium.”

Sergio Perez - Red Bull Racing Honda
Start: 3rd, Finish: 3rd
“That was the hardest and longest race of my life. I wasn't feeling great before the race and then my drink system stopped working on the first lap and with the hot weather today it was very physical and a pretty tough afternoon. I was struggling massively and by lap 20 I was done, so it was a shame I couldn't keep up with Max and Lewis but there are a lot of positives to take from this weekend and back to back podiums are always nice. It's a good result for the Team, the undercut worked well and Lewis had no option but to cover me which helped Max out in front, so we can be very happy as a Team. I'm so looking forward to Mexico, the Team have done well there in the past and I think we'll have a good package for my home race. I can't wait and I hope to be on the podium again in front of my home fans.”

“Unfortunately, we had a suspension problem today, that forced us to retire the car. At the moment we don't know the real cause, so we'll have to go away and investigate this. It's very frustrating because we know every point counts at this stage in our midfield battle. It would've been really good to go until the end of this race, as the atmosphere has been incredible this weekend, right from the very beginning, so it's a shame to not be seeing the checkered flag.”

“It's been a good day, I've managed to score some important points for the team in the Championship, so I'm really happy with that. It was really tough out there as it was so hot! It wasn't easy starting on the soft tire, as I had a different strategy to everyone around me, but it meant that I had the advantage on the opening lap, and I tried to make the most of it. The pace today was quite good, so I'm pleased to be coming away with points.”